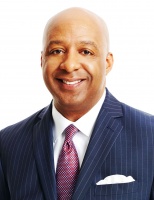 Marvin Ellison has served as president and chief executive officer of Lowe’s Companies, Inc., since July 2018, when he also joined Lowe’s board of directors.

Marvin has more than 30 years of leadership and operational experience in the retail industry, including expertise in managing a large network of stores and employees, as well as global logistics networks. He most recently served as chairman and CEO of J.C. Penney Co., where he implemented a turnaround strategy that improved the company’s balance sheet, increased store productivity, optimized operations and grew key categories.

He has extensive experience in the home improvement industry, having spent 12 years in senior-level operations roles with Home Depot Inc., where he served as executive vice president of U.S. stores from 2008 to 2014. At Home Depot, Marvin oversaw U.S. sales, operations, install services and pro strategic initiatives, dramatically improving customer service and efficiency across the organization to serve both do-it-yourself and pro customers. Prior to joining Home Depot, Marvin spent 15 years at Target Corp. in a variety of operational and leadership roles.

Marvin’s professional and civic leadership has earned him many accolades; most notable are “Father of the Year” by the National Father’s Day Council in 2017, Fortune’s “World’s Greatest Leaders” in 2016 and “Corporate Executive of the Year” in 2016 by Black Enterprise. Marvin is committed to serving minority youth through mentoring programs aimed at inculcating self-empowerment, excellence and higher education. (Source: https://corporate.lowes.com)