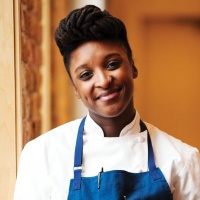 Mariya Russell, chef de cuisine of Chicago’s Kikko and Kumiko is credited as the first Black woman to earn a Michelin star in the Guide’s 94-year history.  The Michelin Guide is one of the oldest guide books, published by the Michelin tire company first in 1926, rating restaurants and hotels. The Michelin star is a mark of excellence for restaurateurs and one of the highest honors a chef can receive.

Like many chefs, Russell’s interest in food started at a young age. She lived in Springfield, Ohio, until she was 14, at which point her family moved to Columbus for her high school years. In high school, she participated in a career academy that first introduced her to the idea of working in a restaurant. From there she moved to Chicago after high school to attend The Cooking and Hospitality Institute of Chicago (a Le Cordon Bleu school that closed in 2017). She got her first job as a line cook. She met Noah Sandoval, the owner of Kikko and Kumiko, when they both worked at another restaurant, Green Zebra.  She has been a trusted collaborator of Sandoval and her work ethic shines through in both her food and leadership.